Starting on November 4th, “Once Upon a Time” will be the new projection show in the Magic Kingdom at Cinderella’s Castle. The show will be narrated by Mrs. Potts as she shares “once upon a time” bedtime stories with Chip. Guests will be able to see some their favorite Disney moments like Peter Pan flying above the rooftops of London to Never Land and the whimsical tea party — hosted by the Mad Hatter. You can also watch Pooh rise to the top of Cinderella’s Castle as he hangs from a colorful balloon.  The new show will also have scenes from “Beauty and the Beast” like the Beast dancing with Belle, his fight with Gaston, and his transformation back into the Prince. The grand finale with have more scenes from your favorite movies and characters along with fireworks. “Once Upon a Time” gets its inspiration from the projection show at Tokyo Disney Resort. The new projection show will replace “Celebrate the Magic” which ends on November 3, 2016, after a four-year run. 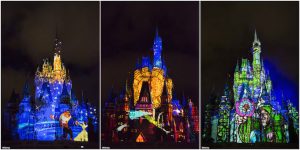